At the Boston Forum, there were many interesting discussions on models which could be used for nested quota management (https://etherpad.openstack.org/p/BOS-forum-quotas).

Some of the background for the use has been explained previously in the blog (http://openstack-in-production.blogspot.fr/2016/04/resource-management-at-cern.html), but the subsequent discussions have also led to further review.

With the agreement to store the quota limits in Keystone
(https://specs.openstack.org/openstack/keystone-specs/specs/keystone/ongoing/unified-limits.html), the investigations are now focussing on the exact semantics of nested project quotas. This becomes especially true as the nesting levels go beyond 2.

There are a variety of different perspectives on the complex problem such that there is not yet a consensus on the right model. The policy itself should be replaceable so that different use cases can implement alternative algorithms according to their needs.

The question we are faced with is the default policy engine to implement. This is a description of some scenarios considered at CERN.

The following use cases in the context of the CERN cloud
We would not expect nesting levels to exceed 3 based on the current scenarios.

Currently, we have around 3,400 projects in the CERN cloud.

A similar use case is for the channel partner models for some SMEs using the cloud where the SME owns the parent project with the cloud provider and then allocates out to customers of the SME's services (such as a useful dataset) and charges the customers an uplift on the cloud providers standard pricing to cover their development and operations costs.

Looking through the review of the different options (https://review.openstack.org/#/c/441203/), from the CERN perspective,

Within the options described in the review, this comes near to the Strict Hierarchy Default Closed model.

To give an example, the ATLAS project has a limit (L) of 100 cores but no resources used (U) inside that project. However, it has several child projects, Physics and Operations which have resources summing into the hierarchical usage (HU). These each have two child projects with resources allocated and limits. 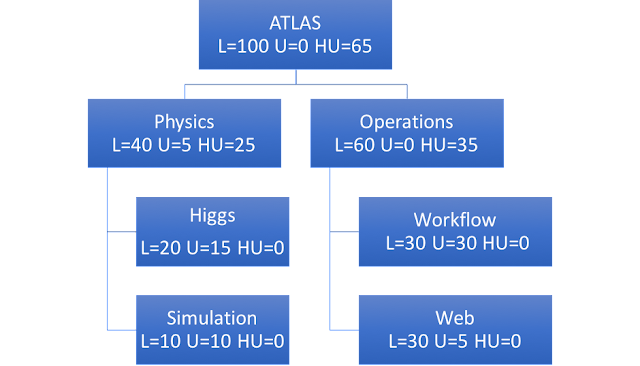 The following rules would be applied

Based on past experience with Nova quotas, the aim would be to calculate all the usages (both Used and HierarchicalUsage dynamically at resource creation time). The calculation of the hierarchical usage could be expensive however since it requires the navigation of the whole tree for each resource creation. Some additional Keystone calls to get the entire project tree would be needed. This may limit the use in large scale environments but the performance would only be affected where the functionality was used.
Posted by Unknown at 04:58